We have a very good mate named Itziar who, like us, is struggling to learn a second language – for us Spanish, for her English. She’s quite good with her English but for practice we spend a bit of time each week in what is called an “intercambio”, where half the time we speak in Spanish and the other half in English. We first met Itziar at one of our absolute fave restaurants, Cantina de Guadalupe, where she works along side many folks from her family. During one recent visit to the Cantina, Itziar presented us with a bottle of her family’s cider which we promptly took home, chilled & drank as our evening beverage. Estupendo! was the general consensus. 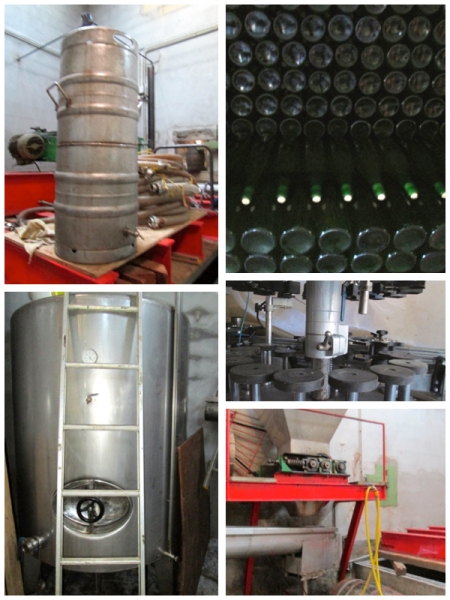 We conveyed those sentiments to Itziar upon our next meeting and she offered up an invitation to pay a visit to her parents home & see the cider making workshop and…buy some cider! Yippee! So off we toddled one fine summer’s eve in Itziar’s car, winding our way up several back country laneways, making a slow ascent toward the foothills of the Jaizkibel Mountains.

We pulled into a courtyard where a passel of folks were having a chat, buying some wonderful cider while the dogs & cats wandered freely about. Itziar introduced us to her Mum & Dad, and then launched into a tour of the cidery, explaining each piece of equipment & how it is used, as well as a timeline of events from start to the finish – cider to sell & drink. Post the tour, samples were poured all round and after a couple or three doses of cider, we headed up the hill for the late evening views.

View from the Hill

It was a warm and slightly humid evening, which left a vague haze across the valley but the view was still stunning. We had a close inspection of the neighbour’s txakoli vineyard which appeared to be coming along nicely. Txakoli is the only native Basque Country grape and it makes a wonderful crisp, low alcohol, slightly fizzy white wine that is meant to be drunk within a year of bottling. Traditionally it is poured from a decent height when served to punch up the effervescence factor. 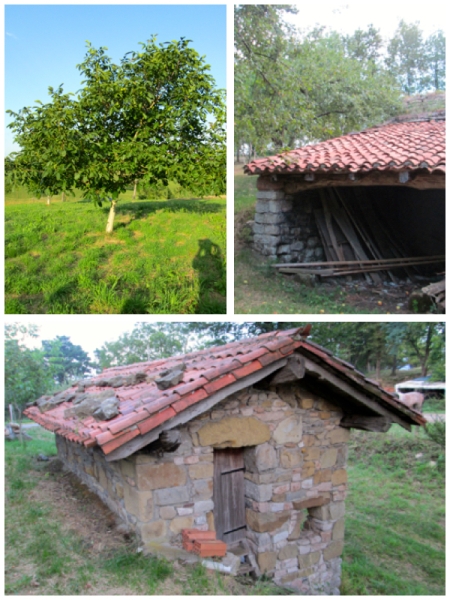 Post a tour of the orchard and the veggie garden, we got down to business and procured 12 bottles of this wonderful liquid. It is our favourite cider that we have tasted so far in the Basque Country and on all our trips through Spain. Long may it last or at least Itziar’s family supply stock! We hope to buy more…and maybe lend a helping hand in next season’s harvest….

We received another one of those invitations you cannot refuse from our mate Idoia to join her & friends on a visit to a Basque sidrería. The early part of the New Year is cider season round these parts where the sidrerías open their doors for a traditional Basque repast and a tasting of their new ciders from barrel prior to a Spring bottling.

Despite a wee bit of a language communication hiccup (we showed up @ 8AM for the taxi, not 8PM as ordered), we all piled into the taxi minibus and off we went to the Mina sidrería. The menu for the evening was: cider,  bacalao tortilla, cider, then cooked bacalao en salsa (house specialty), cider, then the main event – chuletas de vaca (ribeye steaks) cooked on the grill, cider, then dessert of cheese, quince paste & freshly harvested walnuts and cider. 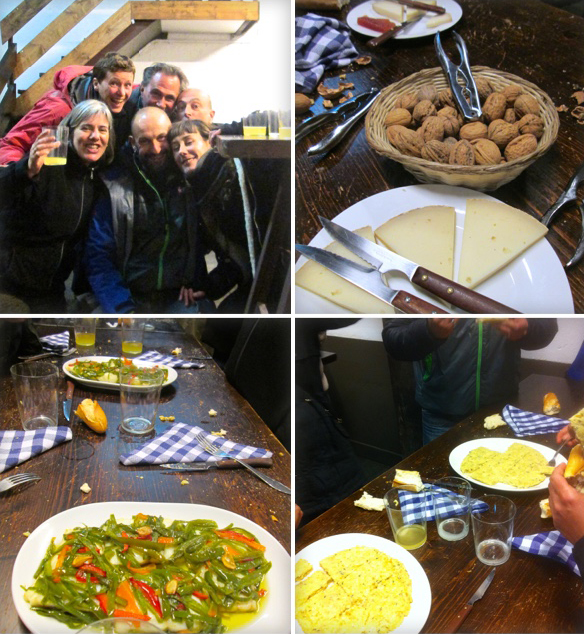 We feel extremely lucky so far in our time in the Basque Country as we have been welcomed with open arms by many folks and we feel very privileged to experience events like this (and the calçots meal with Gloria & familia) that push us beyond a simple tourist’s view of Spain. 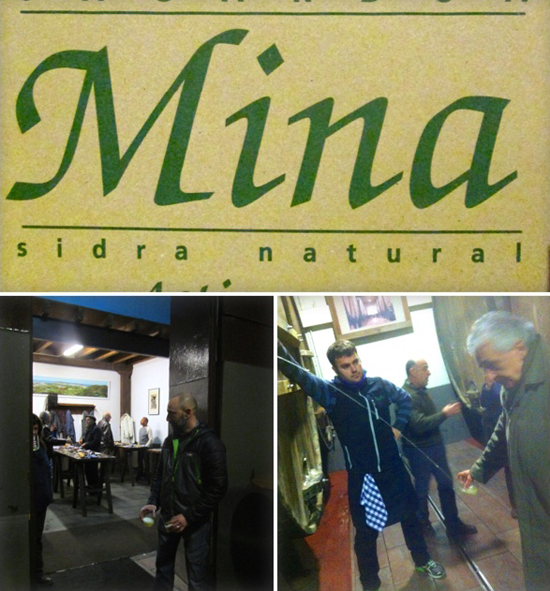 You might think that cider is cider but, just like wine or beer, each area or country and cider maker has a particular take on what cider is or should be. Here in the Basque Country the ciders tend to carry a strong acidic bite or quality – according to semi-cider expert Hound #2 – versus their brethren in England or Australia or New Zealand. I am not a big cider drinker but given the ultra fun circumstances it was not a hard swallow! 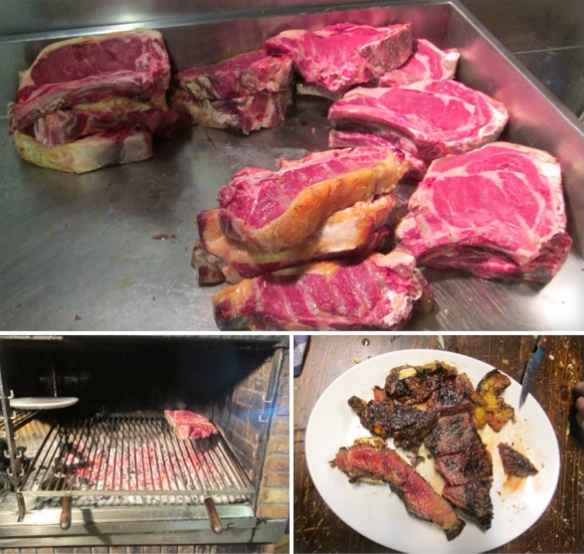 And as you can tell from the top photo below, we all had the ‘cider glow’…and full stomachs. Definitely not a pintxo type stroll of a meal but estupendo!

We got a jingle from our good mate Iñaki (a wine & cider maker) who invited us to take a wee trip with him to Azpeitia where he had been asked for his vino advice. His mate Eddy had recently purchased a sizeable apple orchard with the idea of turning it into a vineyard. Eddy is what you might call a ‘vino loco’ – to say he is passionate about wine would be a vast understatement. Iñaki forewarned us that much of the orchard-to-vineyard conversations would be in Basque and he thought it would take not much more than a couple of hours – no pasa nada… 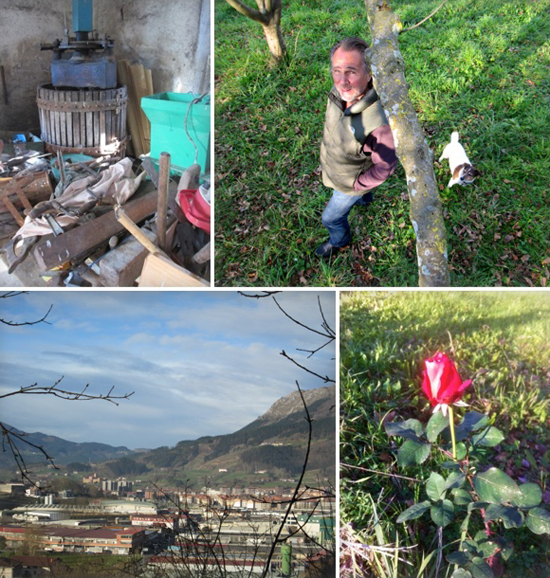 It was once again a stunning day in the Basque Country with sweet blue skies, sun shinning down & mucho mild temperatures. We checked out the old cider press, walked the orchard while the discussions in Basque took place…and about the time it looked like it was a wrap, we were invited to Eddy’s house. Wow! It is always a pleasant surprise when the unexpected turns into a phenomenal time.

We retreated to a family room under Eddy’s house kitted out with a kitchen, bar, a set of long tables with chairs and, of course, Eddy’s wonderful wine cellar. Promptly laid out on the table were several plates of sliced homemade chorizo that uncle-in-law Arume retrieved from the family’s stash, fresh crispy bread and ventresca de atún (tuna belly) floating in savoury olive oil…and of course, some wines from Eddy’s cellar. Oh Boy.

Our snack & wines were accompanied by lively conversations in Spanish, where we were priviledged to hear Imanol Lazkano (sorry but the link’s in Basque), Eddy’s father-in-law, recount his fascinating early days as a improvisational singer (cantante improvisador) in a competitive style called Bertsolari. In bertsolari, a theme or topic is picked and the singer or singers (often found in pairs) improvise verses and melodies. Imanol told us he had travelled the world doing this – all over Spain of course but also to Cuba, South America and even the United States. Our mate Iñaki was a wee bit stunned to find out he was standing next to such a famous person – like me finding out I was standing next to Frank Sinatra and not knowing it!

And oh the wines…Eddy, like many wine aficionados, love to share their bounty. His cellar was quite extensive in its vino coverage but he leans a tad toward the French drops. An so it was that our first bottle, generously poured, was an Arbois Pupillin from Maison Pierre Overnoy. My experience with Jura region wines is limited but this was a stunner…a mutual wine mate of mine & Iñaki’s Dave Brookes does a much better job of putting flesh to the details of this type of wine and its producer.

Next up in the glass was a grape I’d never heard of – Xarel Lo…made by a producer I’d never heard of – Terroir Al Límit. It’s one of the primary grapes (the other two being Macabeu – nice drop on its own too – and Parellada) that go in to making cava and these guys are apparently part of the ‘new outsiders of Spain’ movement breathing new life into old vineyards & grapes. Apparently rare as hen’s teeth – muchas gracias Eddy.

And to top off our vino experience we sampled another outta here bottle, the 2011 Fontanasanta Nosiola by Foradori. A wine from the Dolomite Mountain region of Italy & a superb first try of the native grape Nosiola para mi. Rich & unctuous on the palate but still crisp & clean & very fresh.

After our vino & chorizo & atún repast, Amure offered to show us his chorizo curing room where they had just hung the years makings to dry. Up to the attic we climbed to find a vast room filled to the rafters, literally, with rack after rack of various types of chorizo, colour coded for flavour and family member ownership.

And piling pleasure upon pleasure, we were generously gifted a bottle of wine from Eddy’s cellar, a FULL bag of freshly harvested walnuts, some of Arume & familia’s chorizo and a vessel of homemade quince paste!