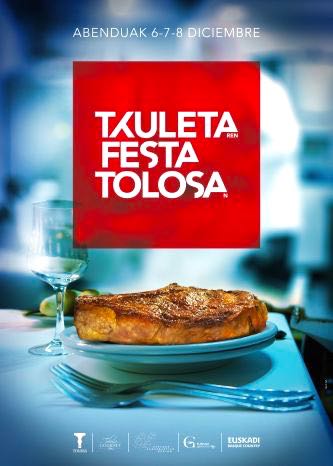 WARNING: To all vegetarian and vegan folks, this post contains meat photos.

The Hounds had recently paid a visit to the Basque town of Tolosa to check out the famous weekly Saturday market (which we loved BTW) and we spotted some announcements regarding a Festival de Chuleta – a Steak Fest to put it simply. A few weeks later, I read in my regular Saturday El Diario Vasco newspaper a detailed article on said festival with loads of history, ticket details, etc…I decided – “I’m in on this deal”.

I made the tactical decision to catch a train to Tolosa so as not to put a cap on any potential fun by having to drive my 1975 Land Rover back home post visiting vino & chuleta heaven. Like many other things here in Spain, trains are sort of an approximation…más o menos. The web site said a train departed from the Irun station at 11AM, so got myself there by 10:30AM only to find there is no 11AM, there is a 10:53AM. Said train, according to the web site, would deposit me in Tolosa at 11:40AM…try 12:05PM. But no pasa nada – I was not in a hurry & still had a decent chunk of time to wander old town Tolosa.

Casco Antiguo (Old Town) is, like many other Spanish cities or towns, the best part of the town with narrow, cobble stoned, pedestrianised streets that simply reek with character & charm. The only negative or slightly creepy thing was that they had loudspeakers strung up & down every street, playing a very weird mix of traditional Basque music, which was then followed by a Heavy Metal tune…go figure. 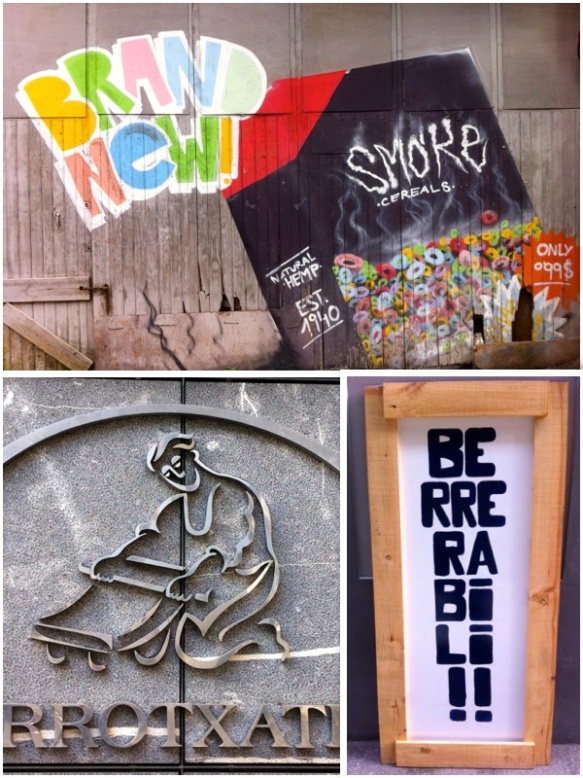 The Tolosa Chuleta Fest was started in 2006 to commemorate the 750th (yes, that’s right 750th) birthday celebration of the founding of Tolosa. Tolosa, over several generations if not centuries, has earned a well deserved reputation for expertise in all things grilled. The chefs who grill are called asadores in Spanish & the restaurants are asadors. And originally the meat used came from the ox, but has now shifted to beef and is called locally ‘vaca vieja’ or old/aged beef.

The festival runs for 3 days (6th, 7th and 8th of December in 2016) and is housed in the ‘Tinglado‘ (translates to ‘shed’) which was constructed in 1899 & 1900 to be the new home to the Saturday weekly market. The Tinglado sits smack dab on the Oria River, with glassed walls providing a very up close & personal river view.

The Festival Folks had divided the Tinglado into 2 bits – a sweet, spacious dining room for the lunches & dinners and a casual pintxo & bar area for a bit of Chuleta Fest warmups. There were 5 or 6 stalls, each offering a different pintxo or two, and of course, a bar serving the usual suspects – vino tinto (Rioja) & blanco (local Basque star txakoli) , cerveza & cider.

I started my festival warmup with the pintxo pictured above (slow braised beef in a pork bun with micro greens, pickled red onion & a secret sauce) which was SO delicious that I came within in inch of having another, but given I was only an hour or so away from a massive steak fest I decided to spread the wealth and sample a different taste treat.

My second comestible treat came in the form of the locally famed chistorra, a Basque sausage that is often cooked up in some local cider. Again, a hit right out of the park – 3 different types of chistorra perfectly grilled with another secret sauce (pictured above). Excelente & washed it down with a local brew call La Salve (translates as ‘Hail Mary’ – cool).

When the clock struck 2, folks started queuing up at the dining hall entrance…tickets in hand and appetites, just like the charcoal, on fire. As we passed through the foyer entrance, we were greeted with a chuleta display to get the juices flowing and we could plainly see the asadores hard & hot at work.

We had 10 folks at our table – 5 native Spanish-speakers, 2 Americans from Denver speaking American, a couple from Holland (who live in France) & me. Besides the asadores hard at work, the Ibérico Jamón carvers were all non-stop knife action to repeatedly fill & refill our plates to kick off the luncheon with a bang. The jamón goes down SO easy & marries perfectly with a glass or two of red vino.

Next up was the veggie portion of the fest – white asparagus in a tangy vinaigrette dressing (sorry, no pics…too busy eating & drinking) followed by cogollos de Tudela – Romain lettuce hearts. Perfect foil to the previous salty & savoury jamón flavours, and the beef that was to follow…a light interlude was mos def called for…

All Fired Up & the Grilling Begins!…A Man & His Ox.

As you can see by the grilling photo above, the Spanish are generous with their salt. As many chefs & cooks will tell you, salting the meat generously prior to grilling or cooking works small wonders as does brining (particularly chicken, turkey or even pork). Despite what appears to be, to me, an excessive amount of the salty stuff, you could not in any way taste it on the finished steak.

So the goods get delivered, and they are oh, oh so good. Cooked (for me) just the way I like it, as I think many meats become totally devoid of flavour when singed to within an inch of their life – might as well eat your shoe. This was perfecto – a crispy, char broiled brown crust with a deep, deep red centre and flowing with good steak juices. The meat was well balanced with just the right amount of fat marbling (relative to the meat) which added delectable, flavourful bits to the overall flavour.

The plates of steak just kept coming – no one @ our table seem to be able to get enough chuleta, nor vino as our Spanish table mates kept hailing our waitress with ‘Más Vino! Más!’ & bottles magically kept appearing. 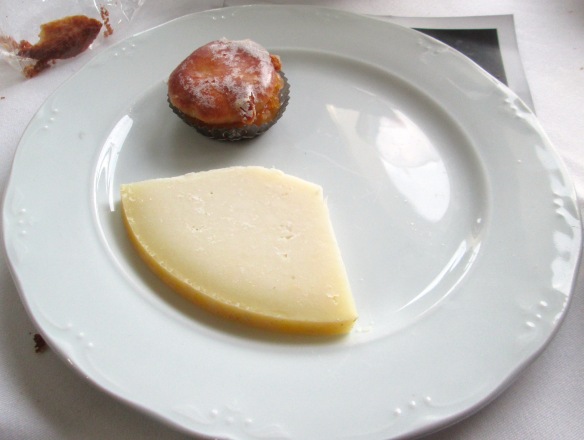 To say I had a good time would be the understatement of the day or week – our festive table was the last to leave the Tinglado & its merry surrounds…all happy campers toddling off home for a wee siesta…Great job Tolosa! Keep up the good work!

We Hounds are a wee bit passionate about exploring our local markets, and we have ticked many market boxes since arriving in Hondarribia, Spain in June 2015. But one that stubbornly still remained on our ‘to do’ list was the Saturday Tolosa Market, which many Basque foodie mates of ours had vociferously said was a ‘must do’. So we mustered ourselves out of a comfortably warm bed @ 7AM, piled into Gertie the Land Rover & bounced & jounced our way to the town of Tolosa (which, BTW, is rather infamous for being the home of the Elósegui Basque beret, of which I am a proud owner). 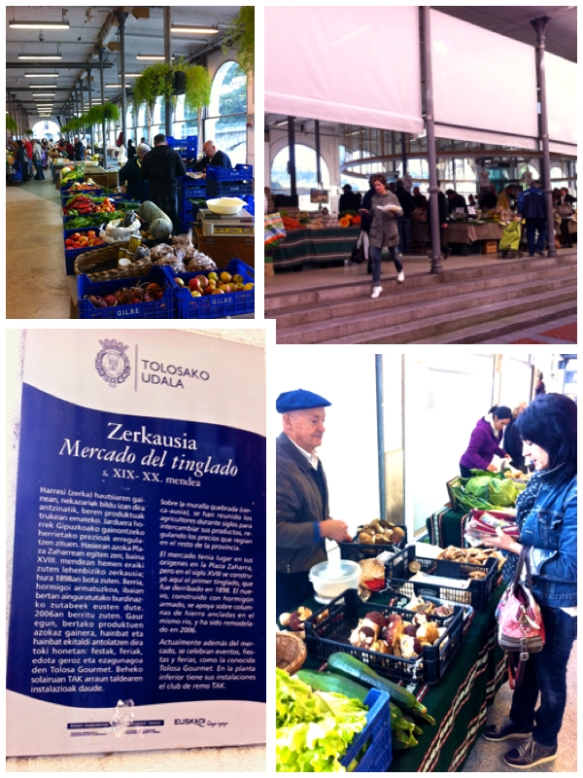 And our Basque foodie mates where damn right – this is a sweet market. Not too big, not too small, not at all limited in its products on offer – just a perfect balance of all the things (in season) you’d be looking for to make a meal or fully stock your pantry. It is called the ‘mercado del tinglado’ which roughly translates to the ‘shed market’, with the actual shed being constructed on this site in 1898 (the market has been going in Tolosa for yonks).

Yum – Fresh Figs In Season & At Their Peak; Shiny Carrots; and Sweet Cauli…..

While Hound #2 got into the thick of it right off the bat at the very first stall with several purchases (including PERFECT aubergines – 3 for a euro…deal!), I decided to have a good squizzy of the market hall & inspect all of the vendors for potential purchases. Well, everything looked spectacular – and awesomely cheap. We were most impressed with the cheese stalls – lots of variety (many Basque market cheese stalls seem to sell the exact same cheese or minor variations on a theme) and prices to beat the band. A quarter slice of a beautiful, creamy blue which we thought would set us back €5 only rang the bell @ €2.7!

Hound #2 was on the prowl for late season figs (see picture above) & voilà! A single stall was in possession of 4 magic trays (at €2.5 a tray) of perfectly ripe figs – score! Something good & tasty will come of that I am sure…

And folks we are knee deep into prime fungi season here in the Basque Country, with most of the hills covered in woods of various tree species providing the perfect spawning grounds for this epicurean delicacy. They were here in all shapes & sizes & flavours (and prices)…completely hand foraged.

And after some very busy shopping, a cafe con leche & sweet treat were called for…we were pointed (by several stall holders) to the Solana.4 cafe, smack dab adjacent to the market buzz. And once again our Basque advice was spot on – the best cup of java we have had in a while and pastries stuffed to the gills with deep, dark chocolate. Excelente!

And now that we know about the Tolosa Market, we will mos def be back…even if it is just for the coffee!